Does astrology work? Yes, it does. Very well. But is astrology real?  That's a very different question.

There can be no doubt that astrology works. The legions of satisfied customers are testimony enough to that. Like visiting a psychic, having an astrological reading performed (especially for $100+ by a seasoned professional) appears to provide the typical client with feedback that he/she finds both accurate and valuable, judging by the volume of repeat business enjoyed by most practitioners.

As we approach the 21st century A.D., it seems high time to address the need for a plausible scientific  hypothesis for how  astrology might work. After all, "Mars," for example, was assigned by the ancients to be the planet of "aggression" because of its red (blood-like) hue. One would hope that modern-day practitioners would appreciate the need to evolve their art beyond this original, "magical" mentality. The science of astronomy, with which astrology was intertwined for thousands of years, decided to get a divorce and take the "high (scientific) road" some 200 years ago.

Janet Sciales, one of Tampa Bay's most prominent astrologers, has bravely gone where few of her colleagues have gone before, daring to stick her neck out on the scientific chopping block. Addressing a meeting of the Tampa Bay Skeptics (TBS) in 1988 (see videotape image on right, and this Tampa Tribune article), Sciales presented her "scientific" theory of astrology, proposing that "the energy from the sun passes through the earth's magnetosphere [which] transforms the energy to a particular frequency." Further, as the sun's energy "passes through the force fields of [the other planets], that energy again is transformed, and reflects back to earth." The energy responsible for the planets' astrological effect thus "does not originate with [the planets]. . . . I believe it is reflected sunlight."

But then what? Sciales explained: "We astrologers believe [that] at conception DNA structure is activated by [the] cosmic radiation, [and] at birth the endocrine system gets irradiated by the cosmic energy." Oh? Forgive me (although Sciales didn't, during the Q&A session that followed her TBS presentation [see her 50-sec. tirade]) for pointing out that the amount of solar energy being reflected to earth from any given planet is negligible in comparison to the totality of energy from the heavens bombarding the earth, and that the amount of electromagnetic energy being radiated from the lights in the delivery room far exceeds the amount of solar energy permeating that enclosed room. Not to mention the fact that there is nothing unique (spatially) about the moment of birth other than a few less inches of flesh between the baby's "endocrine system" and the heavens. And Sciales herself complained about how the precise moment of birth is often not recorded accurately, and as for the precise moment of conception, well . . .

Sciales then asked the Tampa Bay Skeptics to help her prove her theory. Not to place the cart before the horse, we countered that she should at least be willing to first demonstrate to us that, through astrology, she can correctly make predictions/observations with accuracy greater than chance guesswork (our ongoing "$1,000 Challenge" prize for proof of the paranormal would have been awarded had she succeeded). We noted that a study published in "Nature" on Dec. 5, 1985 (pp. 419-425) seemed to definitively establish that astrologers simply cannot do what they claim to be able to do. Although initially agreeable, Sciales later decided not to allow herself to be scientifically tested by us (see this St. Petersburg Times article). 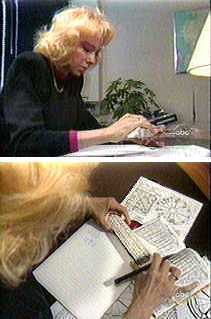 But Joyce Jillson (right), Hollywood astrologer to the stars (whose column is carried by the Tampa Tribune), unwittingly allowed ABC-TV reporter John Stossel an opportunity to demonstrate for his millions of "Good Morning America" viewers in November 1988 just how well astrology works in spite of it appearing not to be real. Jillson first prepared a detailed horoscope for a person unknown to her, whose birth information (which is all she requested) was supplied to her by Stossel. Stossel then distributed a copy of the completed horoscope to each student in an adult education class (all 20 students had given Stossel their own birth information one week earlier).

The students, thinking that they were each reading their own personalized horoscopes, marveled at how Jillson knew things about themselves that no one else could possibly know! But they all, male and female, were reading the same horoscope,  that of someone described by Jillson as "enormously bright . . . [with] sexual charisma . . . great charm . . . a sense of moral propriety . . . [who] may know celebrities . . ." Stossel thought that Jillson may have incorrectly assumed the birth information to have been his own. But Jillson's one-size-fits-all unisex horoscope was actually based on the birth information of mass murderer Edmund Kemper III who, in addition to many other "charming" deeds, had cut off his mother's head and used it as a dartboard!

Concluded Stossel, while confronting Jillson on camera with the facts and watching her squirm, "I just think this shows it's a hustle, and you make money by writing general things that everybody believes is about them."

Blame his Mars in opposition with Uranus for that outburst.

More on "Astrology" from The Skeptic's Dictionary